The best crime films are those that do not subscribe to a particular formula. Those that keep you on the edge of your seat because you are caught up in the mystique of it all. Good crime films aren’t heist films or action flicks. They are character studies where fascinating personalities take center stage and the plot seems to unfold around them. Some of the classic crime capers of the past, films like Reservoir Dogs and The Taking of Pelham 1-2-3, are films that rely on the presence the actors create.

These quirky films exhibit some of the more interesting aspects of crime, telling off-beat stories through likable characters without holding back.

The Way of the Gun

Starring Benicio Del Toro and Ryan Phillippe, this kidnap film is fraught with twists, turns and amazing character actors. The film was written and directed by Christopher McQuarrie, who was one of the two heads responsible for the outstanding script behind The Usual Suspects. With sparse dialogue, sweeping shots, silence and plenty of cuts, this film tells the story of a kidnapping. The two main leads decide to kidnap Juliette Lewis, who is a surrogate mother for a rich couple. The couple decides to get their surrogate back by hiring a mob of men to come after Del Toro and Phillippe. 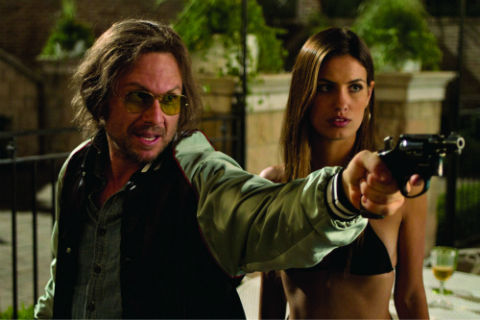 James Caan plays an amazing money man with interests that are not readily apparent until well after we’ve met his character. Everyone with a name is given at least one scene where they have the opportunity to shine. Parts of this film are quite brutal, and some of the gun battles are amazing displays of stunt work and cinematography. The film touches upon the darkest aspects of crime flicks with a dry sense of humor, like a bar buddy telling an unfortunate story.

If you’re not immediately on board because of Crispin Glover, consider the all-star presence of Michael Jai-White. Glover plays an obscenely wealthy film producer who becomes the suspect in a sex crime. To make matters even more complex, the officer investigating the crime (Billy Burke) is falling for the victim. Jai-White is the levelheaded body guard tasked with righting the wrongs and sweeping everything unpleasant beneath the nearest rug. Of course, any good bodyguard understands his boss’s weak spots. Freaky Deaky is dynamite, car chases and 70s funk.

Everything gets a little muddled toward the middle, a la Pulp Fiction, but director Charles Mathieu does weave these threads together. The intro sets us up for an explosive romp (or rump), but like any Elmore Leonard adaptation, it’s easy to get caught up in the unpredictable nature of these characters. Another notable feature for the film, as a film buff, is what it doesn’t show. For a film so engrossed with sex, very little of it is shown on camera. Bravo for letting the audience use their imagination.

If you have not seen this classic film, stop what you are doing and rent it immediately. A cynic might say this is a 98 minute film about Francis McDormand eating breakfast, but there is so much heart to this thriller that is often under appreciated. It’s literally the most unfortunate few days in the life of a small town police chief, who also happens to be a very pregnant woman. It begins with a bungled kidnapping before bodies begin piling up. Some classic actors are on display here, with Peter Stormare playing the perpetually smoking antagonist next to the very likable Steve Buscemi.

Like any Cohen Brothers film, Fargo isn’t about any one thing. Fargo might be about Marge and her investigation, it might be about the kidnappers, it might be about Jerry Lundegaard and the relationship with his wife and her family. The wonder of this film is the ability to watch it with a different perspective every time you see it. Fargo is a contagious little film that seeps into your voice after you’ve watched it. Maybe it will make you Minnesota nice too.

Snatch was Guy Ritchie’s second film, and basically had a bigger budget than Lock Stock and Two Smoking Barrels. Both are great in their own right, but Snatch is a bit more straightforward than Lock Stock. That linear plot is Snatch’s saving grace. A lot happens in this film and the cast of characters is very wide. There are also a lot of likeable people in the film too, which helps bring a certain memorability to every scene.

The film follows several people trying to snatch a very large gem stone. From the beginning, you’re aware that this movie is very smart. The Rabbi scene is an excellent opening, and the film continues that pacing and style all throughout. Snatch was one of Jason Statham’s early roles and it’s one of the few films where he doesn’t beat the hell out of everyone. Giving him a platform to act turns out to be a great thing, as he and his comic side kick played by Stephen Graham find themselves trying to survive the ire of the head of an illegal boxing ring. This brings Brad Pitt into the mix, whose nearly incomprehensible accent adds immense character to the film. Pitt is a completely different man in Snatch.

Dog Day Afternoon, starring Al Pacino, is the true-ish story of a bank heist with interesting motives. Sonny is a first time criminal who pairs with Salvatore “Sal” Naturale to pull off a robbery for seemingly nebulous reasons. As the film unfolds, we gain a clearer vision of our character’s motives and a deeper understanding of what makes all of them tick. Not a perfect film, but definitely the kind of character driven drama that defines a fantastic crime thriller.