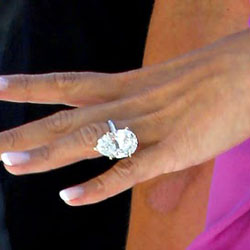 Whether it is buying a home or estate jewellery, celebrities are known for sparing no expense on getting what they want. And now a growing number of the rich and famous are designing jewelry, too. Here’s a list of a few celebs that popped the question with custom-made engagement rings.

When rapper Kanye West proposed to reality TV star Kim Kardashian on her 33rd birthday, he did it with a 15-carat square diamond ring that he designed along with Lorraine Schwartz. The ring was so beautiful that Kardashian was speechless, at least for a moment. What else did Kanye surprise his bride-to-be with? He rented the AT&T Park in San Francisco, where he asked the big question on the stadium’s Jumbotron while an orchestra that he hired played “Young and Beautiful,” by Lana Del Rey. The couple married on May 24, 2014.

In collaboration with Robert Procop, Brad Pitt designed a stunning engagement ring for actress Angelina Jolie. Apparently it took Pitt an entire year to design the ring, which cost the star an estimated $250,000. The two stars have six children together, but they haven’t tied the knot yet.

Although the vegan baker Matthew Mosshart might not be a celebrity, the lady he proposed to with a custom Tiffany ring is. Kelly Osbourne was engaged to Mosshart for six months before she revealed the engagement and the beautiful ring that she designed herself. According to US Magazine, she designed it to look like an earring that her father wore when she was young.”

Cynthia Findlay Antiques is a leading retailer of contemporary, estate, and vintage jewellery, including a wide selection of vintage rings and Art Deco rings.